Long Sleeves and long pants.. or so long!

Having an autistic child opens up a whole new perspective towards children behaviors for me. Looking at each child is never the same again.. when i saw a child throwing tantrums, i dont judge the parents for not being able to handle the situtiation. In fact, do you think if we do really know how to handle a situation with a child? They seem to have their mind and the world of their own, autistic or not. Sometimes i question myself, maybe I am too, the autistic one!

Faaeq is really obsessed with long sleeved shirt and long pants now. When he is home in the evening, the first thing he'll do is to take off his shorts, and struggling to take off his sleeveless top or short sleeved shirt, and find a fully covered clothes. Last Saturday, after he took his morning bath, he was really mad at me for putting on him shorts and sleeveless.. mengamuk2 sampai lah dia jumpa balik baju tidur dia dlm bakul baju kotor, and pakai semula baju tidur tu! haih. I guess he doenst like the feeling of exposed legs and arms.. the trick to get him to wear them is to let him run around in his diapers dulu lah kot...

Autistic kids seems to be extreme with sensory. And now faaeq makes so much noise humming and babling and mumbling.. he wont stop 'talking'... in his own language that is! and i read somewhere that making 'noise' is some kind of self preservation technique for an autistic child. It means when he hums and makes sounds, the outside noises and distractions can't get in. Logic. He used to cover his ears when he hears certain sounds that he doesnt like. Kdg2 lagu, kdg2 bunyik burung, kdg2 bunyi motor... 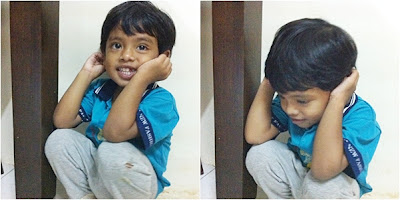 ni time ibu nyanyikan lagu Adele kat dia. Ok la... suara ibu tak sedap eh! Grrrr...
Also, i've read a real life experience told by an autistic person (he's an adult now and giving talks on his experience when he was small and having to deal with everyday challeges that ordinary people wont understand).. he said when he was small, he hated haircuts coz it was really painful for him! The sound of the machine, the hair fall, everything about the  haircut made him in pain.. he couldnt explain why he felt that way.. maybe it was sensory overload.. i dont know.. but that explains why faaeq will scream his lung out whenever he has his haircut. Maybe. Who knows what he's going thru. That explains why we let his hair grow long and try to minimize the haircut sessions for him. Besides, he looks so cute with long hair, kan? kehkehkeh 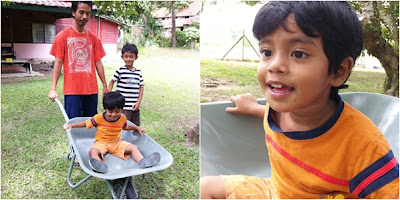 At Rembau. He can climb the tress, run here and there, play with sand, smoke.. i let him be. takpelah lepas tu boleh mandi.
So I guess for the time being we just hv to deal with his latest obsession-  baju lengan panjang and seluar panjang. Bagus jugak, nyamuk tak gigit.. stylo puna de gak kot.. haha 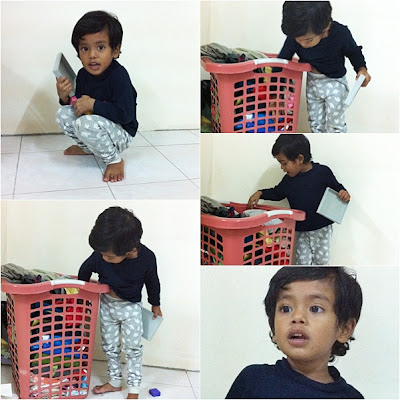 he put his puzzle pieces in the basket and couldnt find them among the clothes :P
Autism. Ya gotta love it.


Till then, have a great day u ols!

Email ThisBlogThis!Share to TwitterShare to FacebookShare to Pinterest
Labels: autism

Thank you for sharing your experience raising an autistic child.

I enjoy reading them and learn things along the way.

Odie, i'm positive too he'll do great.. we have to stay positive kan.. apa2 pun semuanya possible.. try our best and the rest just tawakal je.. i'allah the best is in store :)

kak harsa, thks u for reading my stories :) appreciate it.

He looks just like any other normal kids. I think you are doing a good job in bringing him up and guiding him. I like the fact that you write about him, and autism in your blog and share with other readers. Some parents hide their kids when they know their kids are not like other normal kids. I am sure if all parents give full support to their kids who are different from the rest, I am sure the kids will grow up to have more confidence and become more independent.

I think Faeq is doing fine and he will soon grow up to become a fine gentleman.

Hi Sally,
I worry a lot about him actually.. now he's small i can protect him but i keep thinking of many things that i cant do to him when he's grown, itupun kalau umur panjang.. so all i have is just hopes and prayers he will grow up to be as normal as he can be. autism is a lifelong journey but there is so much we can do to help them be in our world as normal human beings.. accepted and not being judged.
i am lucky to have a platform to share my stories and get supports emotionally from friends like you.
thks for reading :) appreciate it a lot.

Dont worry so much Edi. Just cross the bridge when you come to it. I am sure his elder brother loves him as much as you do and he will take care of Faeq when he grows up. I pray for you that everything goes on well and smoothly for Faeq and your family.