This seems logical.. although I dont really know what exactly 'mirror neuron' is, I know that autism is caused by abnormalities in neuron and since 'mirror neuron' is one of the many zillions neurons in our brain.... the explainations are acceptable..

" The mirror neuron system is a brain circuit that enables us to better understand and anticipate the actions of others. These circuits activate in similar ways when we perform actions or watch other people perform the same actions.

Now, a new study published in Biological Psychiatry reports that the mirror system in individuals with autism is not actually broken, but simply delayed.

"While most of us have their strongest mirror activity while they are young, autistic individuals seem to have a weak mirror system in their youth, but their mirror activity increases with age, is normal by about age 30 and unusually high thereafter." Dr. Christian Keysers.

Yes Faaeq's developments in his social skill, motor skill and speech are definately delayed. I think he is delayed by 2 years! Meaning, eventhough he is going to be 4 YO come November this year, he is like a 2-year-old boy! but his speech is much more delayed, maybe by 2 1/2 years kot.. he makes sounds like a 1 year old now.. no speech yet, except for occasional 'akittt'.. when he is pain, "ayaaaa" when ayah didnt bring him along! 'buuuuu'.. whenever he feels like he wants to say it. Eye contact is still poor, but I know he has improved very much compared to before we brought him to therapies.

For now, I just let him be himself. To be honest, we dont do much formal therapy sessions at home. I think the formals ones are the ones when we go to HUKM and Putrajaya Hospital. At home, we treat him just as normal as Imran. He get scolded when he misbehaved, he gets lots of hugs and kisses from me, he gets to watch his fav videos, but when it's American Idol time, sorry, video has to stop, ibu nak tengok AI pulak ok.... hehehe...

Although not formally, informally he is getting as much lessons as possible. Anything from watching and doing simple tasks, we encourage him to do by himself. He has to be in a rich language environment. We speak to him as normal, but at the same time emphasizing on the important words.. I think he will be a good cook when he grows up coz he gets enough lessons of cooking from me and his dad!

Last weekends, he got to meet his one and only cousin, baby Zaim :))) guess what, he hugged and kissed him non-stop! 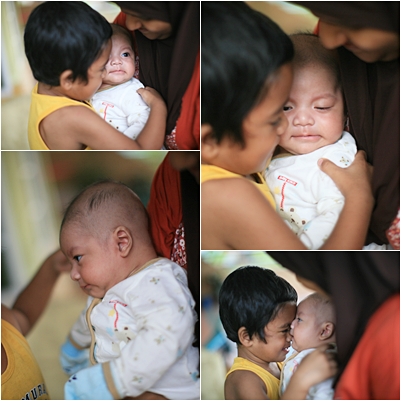 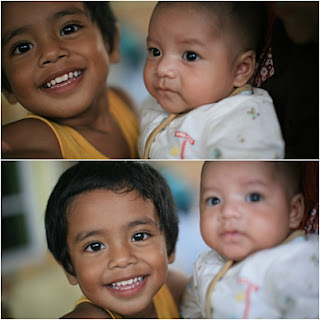 I think for the first time, we got to see the caring and loving side of him. And since he is still a 'baby' at heart, maybe that's why he can connect with baby Zaim!. Cumanya, Zaim rimas asyik kena peluk je... sampai nak tidur dlm buai pun tak senang kejap2 terkejut kena 'terjah' dengan Faaeq! hahaha.. 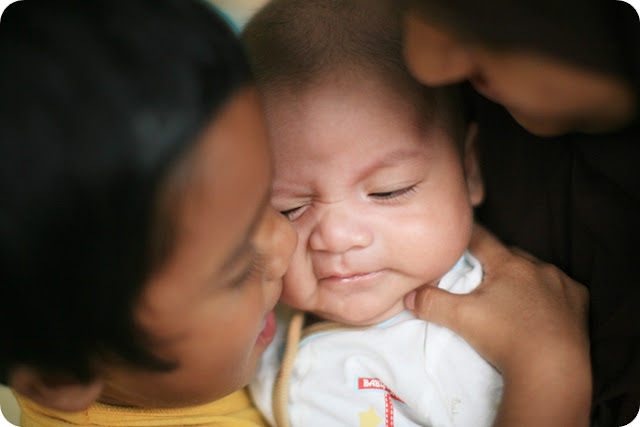 Have a great weekends, friends!
♥ edi
Thoughts by Edi at 3:45 PM

Email ThisBlogThis!Share to TwitterShare to FacebookShare to Pinterest
Labels: autism

haha edi, ur fav shot is also my fav...mmg nmpak rimas sungguh bby zaim tu. on second thought, a bby brother might be a good 'therapy' for faeq (pandainya i bercakap haha...) and oh yes, i think Abil is also delayed by 2-2.5 years...keep it up with those 'informal' therapies, actually the effects might even be greater than the formal ones (telling this to myself also) hehe

i love the first shot (bottom right) faeq is so cute, hitam manis gitu....tabik to you. Happy mom's day...