It's all good, He's all great

i've been so so so busy lately.. so many things happened, tak sempat nak fikir mana satu nak share kat sini.. anyway, last tuesday, was a great milestone in our life. our faaeq, (my second one), has been officially diagnosed as an autistic child. hm... cerita panjang yg i akan pendekkan, everything started when we noticed that he's not been talking since.. ever! dah masuk 2 tahun pun still x ada words coming out from his mouth.. so agak pelikla... bila borak2 dengan org, people would just say that he will be talking soon, alah, jgn risaula, anak i 4 tahun baru bercakap! dia malas je tu... berat mulut... alah dia  saja je tu.. jgn risau... nanti dia nak cakap, dia cakapla....

but, we as parents, of course tak senang hati...semua pakai sign language. if he wants anything, he'll take our hands and guide us to what he wants.. i brought him to see my pead friend, Dr A, when he was 2.. (he's 2y9mths now-come Nov 4th he'll be 3). yes he's delayed in 3 areas of child's development ( total is 4-Physical Development, Social & Emotional Development, Thinking Skills, Communication Skills). the only one he's on track is the physical development. Phew... ok... We were told not to worry too much as boys tend to develop later than girls.. and he might catch up later.. meanwhile, kena buat juga hearing tests (just to make sure he can hear properly, kot2 dia tak boleh cakap tu sebab dia tak dengar).. we went thru all the appoinments at Putrajaya Hosp, the peads appmts, the audiology appmts, the speech theraphy.. yes.. speech theraphy.. that's the most recent we went and that was the one which made me got soooo frustrated... the therapist cant do anything! no, not because of her lacking in skills or anything, it's because faaeq cant even sit for 5 seconds without wanting to 'explore' the place.. my my... we went home frustrated, feeling helpless..

immediately i called my pead friend again (sebenarnya dulu taknak follow up dengan dia sbb dia sgt2 bz plus she's in PPUM which is quite far for us to go.. ).. arranged a meeting with her and she wrote us a referral letter to bring to HUKM to see a child psychiatrist. yup.. PSYCHIATRIST.. sounds funny kan.. but a CP is the right person to evaluate a child's behaviour problem and detect if there's anything not right with the kid.. after endless questions and observations, she said, YES, faaeq has autistic traits and he needs theraphy. lots of theraphies to get him back on track and catch up with his peers. although we suspected he has autism long before... (we did some online research and he has so many of the symptoms of an autistic child), but hearing it coming from a professional, a doctor, who basically 'officialite' the term, makes my heart stopped a beat or two. to sink in the information i need to hail a deep breath. my... he is special after all.. alhamdulillah... we are so blessed to have him in our life.

The CP stressed autism is not a disease. it's delay in development and the only way to help the child be on track with his age is through theraphy and it's proven they can be like other kids if they are trained and go thru therapies such as occupational theraphy, speech theraphy and a new kind of theraphy- applied behaviour- or something like that. they can go to normal schools (many of them did). i'm overloaded with information from the internet and now, i'm just tired of watching and reading about autism. in malaysia, autism is quite new.. tp kat UK, US semua ni dah biase.. sampai budak2 normal pun parents ingat autism jugak.. (paranoidla pulak)... the CP at HUKM gave us useful informations on where to get help and where we can go to get the therapies apart from government hospitals.. which is really great.. she even filled up a form to apply for OKU card from Jabatan Kebajikan.. she said in Malaysia, they just categorized autism as OKU (orang kurang upaya) eventho it's so so unappropiate.. kalau kat US mmg ada special card for autistic person.. (mcm dlm cerita My Name is Khan tu.. kan SRK autistic!).. she told us, it's perfectly normal for parents to resist getting the card coz it generally mean that we are saying our kid is an OKU, but the thing is, this OKU card comes with a certain benefits (such as tax exemptions, special privilages at government hospitals and all).. for me, if i ever will get that card (i think i will), it's because i want to keep it as a 'token', i'll show the card when faaeq has grown up and together we'll laugh about it. and he'll use it as an interesting piece of information to talk about!

so... the journey begins... actually i dont even see him differently from my first one.. each of them is so special in their own way and i embrace their differences and i know, as a mother, my kids will grow up fine and be someone great. that's it. autistic or not. after all, they say Bill Gates is autistic :) 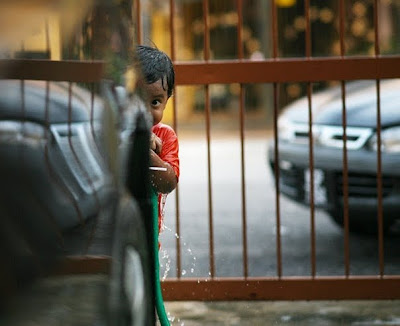 Thank you so much for sharing the info. I also have a few friends who have child with the same problem as you, but like you said, they cannot see the diff from their other kids. Insyallah, sama-sama kita doakan your son will recover soon. Eih, please dont stop baking :)

Edi, sorry to hear that. He is so adoreable.. God is testing u and yr husband. Banyak bersabar. Be strong.

I feel you Kak Edi *tight hugs* Exactly the same experience that we had for Jaja altho different cases.

I have several friends who has autism child. I can introduce you to them if you want to. Sharing is caring. It's true indeed. When I was in Hospital Selayang, I met few parents with JIA kids. I felt so glad to meet them cause they really know how I feel and their support.. tidak terkata *terasa syahdu plak*

I'm also thinking of getting Jaja an OKU card. Apart from the benefit, it's important especially to get better placement in school e.g. sekolah dekat rumah, ada keperluan OKU, etc..

Kak Edi, you're a strong mother!! Dlm sibuk2 bercupcake, you never told us about this and kept it to yourself. Unlike me, I dok ler bercerita pasal Jaja coz I'm not strong enuff to hide my emotions.

insyaAllah...dgn perhatian, sokongan, kasih sayang, komitmen & usaha faeq will be juz like others in his very own special way :-)

odie, i'm definately not strong enough. i never intended to keep this to myself. but i have to make sure dulu.. sbb tu bila isnin hari tu after i dengar sendiri from mulut doctor, barulah i ready nak share the news to you guys.. sebab i dah letih dengar all those comments saying 'positive' words when i raised out my concerns about him not talking.. so expect more stories about faaeq after this.. hehe.. and PLS KEEP SHARING about Jaja.. i pun x tau tau psl dia, after i baca your blog br i tau.. what a special girl she is.. i dok teringat kat dia pegang turtle tu :( the thing is, i'm so glad u're not using that as an excuse for her to be 'different'.. our kids are normal, they're just gifted and we as parents hv to know, what gift they hv :) love u!

umieaisyah, thks for dropping by :) *hugs*

salam edi, you guys are all good, I'm sure. Prayers & love for you & the whole bunch.

He is such a sweetheart, just look at him. Don't you dare let yourself be disheartened by this alright. He will catch up soon with everybody else. He is a late bloomer, like aunty wiz. I was so slow that my parent gave up on me so many times. It is a phase, a growing up phase for him k edi. Everyone is different and grows up at their own special pace. He is sooo lucky to have you.

bear hugs for both of you.

anne, thanks a lot..
kak wiz, *hugs* thks so much.. yes, i too believe he is just taking his own sweet time :)