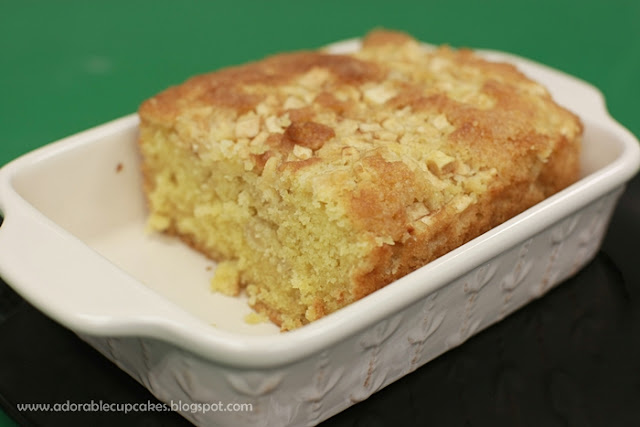 (A)
2 cups self-rising flour
1 teaspoon baking powder
1/4 teaspoon salt
1/4 teaspoon cinnamon powder (u can omit if u dont like cinnamon)
* sift together, set aside

4 apples (any kind will do) peeled and cut into small pieces
Light brown sugar (fine or coarse, i use coarse) for drizzling on top of the cake 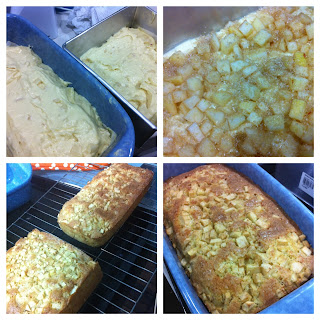 1. Sift all A ingredients,set aside
2. Cream butter and sugar using a mixer, add vanilla essence, then add eggs one at a time. Mix well in between eggs. (the dough will curdle, dont worry about that!)
3. Add milk, fold
4. Add all A ingredients, fold lightly until all well mixed
5. Fold in HALF of yr apples
6. Put in baking tray.. i used one loaf tin and one 6 inch square tin.
7. Put another half of yr apples, drizzle with brown sugar
8. Bake.. i bake mine at 160deg, about 40 mins. I put all two tins in one go. haha.... nasib baik ok :P

It's crunchy on top coz of the sugar and apples, and some cruncy apple pieces in the cake, it smells good coz of the cinnamon... ahhh... 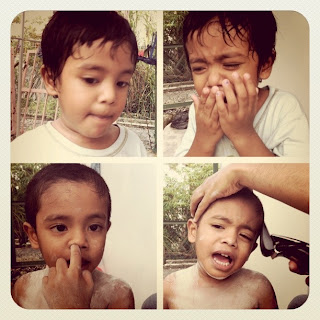 My drama king got his haircut last weekend.. the usual drama, but this time less :) i think he got used to it already.. or maybe coz he's bigger now.. our speech therapist (we had an appoinment last wednesday) said he improved a lot on his eye contact and is cooperating very well.. he is beginning to understand instructions, more playful and definately less tantrums.. the other day he came to me saying "cu, cu cu cu c".. and i said, Faaeq nak susu ya... mana botol? ambik botol.. and off he went to the sofa where he left his empty milk bottle, took the bottle and gave it to me! How about that... :))) Another incident which made me strongly believe that he understands was when we were getting ready to bed, he was lying on the bed playing with my phone, watching Adele, Taylor Swift, nasyid, Asma ul-Husna and others..  I went in the room telling my husband, "ni susu faaeq sorok sini tau". I put the bottle at one corner of the bed, mmg tersorok la.. x nampak.. plus the room was already dark.. after a while, he got off the bed, went straight to the place where i hid the bottle, took it and casually drank it on the bed! 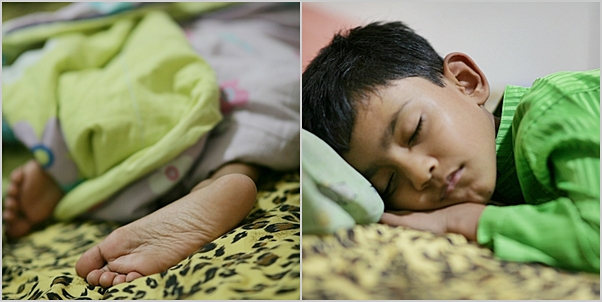 ..and my talkative imran is not around.. he's in Rembau with his Atuk and Wan.. cuti sekolah, a great bonding time with grandparents. Next week my dad will come to fetch him to Terengganu pulak.. the house is quite.. i miss him so much.. i didnt even throw away his origami lying all around the hs.. when he's around, pantang nampak atas lantai mesti suruh dia buang.. he'll do so many origamis and will leave the papers lying around.. mm... but i know he's having a good time, so that's ok. i asked him, do u miss me, he said, ingat ibu bila nak tido.. takde org nak cerita.. :( 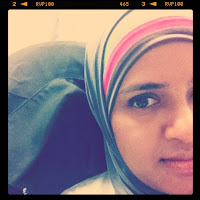 Have a great weekend friends! ♥edi
Thoughts by Edi at 10:51 AM

Email ThisBlogThis!Share to TwitterShare to FacebookShare to Pinterest
Labels: recipe